The Dust of Death 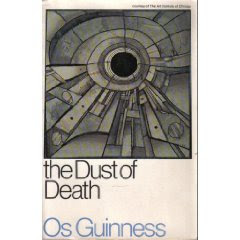 Yesterday, while scanning the stacks during the frist day of the Denver Seminary library book sale, I espied a hardback copy (with dust jacket) of Os Guinness first book, The Dust of Death: A Critque of the Establishment and the Counterculture--and a Proposal for a Third Way (InterVarsity Press, 1973). Guinness was then a teacher at Swiss L'Abri, the Christian study and retreat center founded by Francis and Edith Schaeffer in 1955. He would go on to receive a doctorate in sociology from Oxford, write many laudable books, and become one of evangelicalism most trenchant spokesmen.

I first read the book (in paperback) in about 1977, while getting my sea legs in apologetics and cultural criticism in the midst of the very secular University of Oregon, where I was a newly-converted undergraduate. We studied the book for a course taught by a Christian at the University. Guinness's assessment of Western culture was trenchant, deeply researched, and confident--not only challenging both the establishment and the counterculture, but offering a uniquely Christian way of being in the world. He did not shrink back, but stuck his neck out into the world of ideas. On that neck was a formidable and incisive intellect, one that I would benefit from for decades to come.

I mark this book (along with several others mentioned elsewhere on this blog) as giving me intellectual confidence as a Christian while I was immersed in the secular university. Guinness was interdisciplinary without being anything like dilettante--assessing his broad and deep subject matter historically, philosophically, sociologically, psychologically, and theologically. Guinness interrogates the likes of Herbert Marcuse, Sigmund Freud, Friederick Nietzsche, Jacques Ellul, Marshall McLuham, and many others. While he drew inspiration from Francis Schaeffer, Guinness was his own man, and took Schaeffer's critiques to a deeper levels and addressed topics not tackled by that great man.

Call me a book fetishist, but I relish this well-kept (but never read) edition of The Dust of Death, with the modern art on the front cover and the granular photograph of the young Englishman on the back. I plan to reread and re-appreciate it.
Posted by Douglas Groothuis, Ph.D. at 11:29 AM

I saw that same copy and would have picked it up, had I not already had a copy in my personal collection. I was a little surprised someone hadn't already picked it up for $4.
Another good one by him that I'm reading right now: "Fit Bodies, Fat Minds." In it, he explains how Evangelicals have become more and more anti-intellectual, and what to do about it. He makes no apologies for calling anti-intellectualism among Christians what it is: sin.

Fit Bodies is a classic book as well. Os always hits the nail on the head, and with class.

Hope to see you in more PR classes soon.

I'm actually registered for your "Faith and Doubt" seminar in the fall. Looking forward to it!

Hurray! Bring more people with you. Now that we have two full-time philosophy professors, we need more students.

What does he say about Ellul? I used to be a big Schaeffer fan, but I find Ellul's picture of Christianity both more accurate and more inspiring. So I'm curious what the Schaeffer crowd had to say about him.

Os has a great appreciation for Ellul. I'm not sure Schaeffer ever mentioned him, though. Ellul was an astute social critic, but a pretty poor theologian (Barthian). Nevertheless, I have read and benefited from many of his works:

1. The Humiliation of the Word
2. The Subversion of Christianity
3. The Presence of the Kingdom

Thanks Doug -- those three books have been very important for me as well! I would add Politics of God/Politics of Man. And I'm currently reading Reason for Being. (I need also to read Meaning of the City.)

Interestingly, Ellul doesn't see himself as a Barthian and even finds Barth lacking in a lot of ways. From what I've read of his interviews and personal essays, he's much more influenced by Kierkegaard.