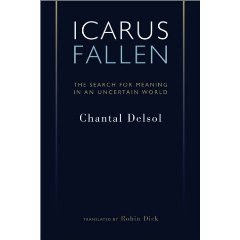 1. Ian Colle, a 2009 Philosophy of Religion Masters Degree graduate from Denver Seminary, has published an excellent review of Fear of Knowledge: Against Relativism and Constructivism by Boghossian at Denver Journal.

2. Jeremiah Heiser, a 2009 Master of Divinity graduate from Denver Seminary, has published a first-rate review of Icarus Fallen: The Search for Meaning in an Uncertain World by Chantal Delsol in Denver Journal.
Posted by Douglas Groothuis, Ph.D. at 9:11 PM

"Boghossian argues that the key to the success of the relativist/constructivist view is not its philosophical strength... rather it is the feeling of satisfaction the cultural relativist appears to derive from being able to claim that any purported knowledge with which they disagree is based upon a social value they do not share and is therefore of no import. In short, it gives them an easy out and an ability to not have to intellectually defend their beliefs against competing truth claims."

By the way, Dr. Groothuis, are there a few secular philosophers whose works you would recommend? Or any favourites you like to read or whose writings you think are especially important for Christians to be familiar with? Thanks.