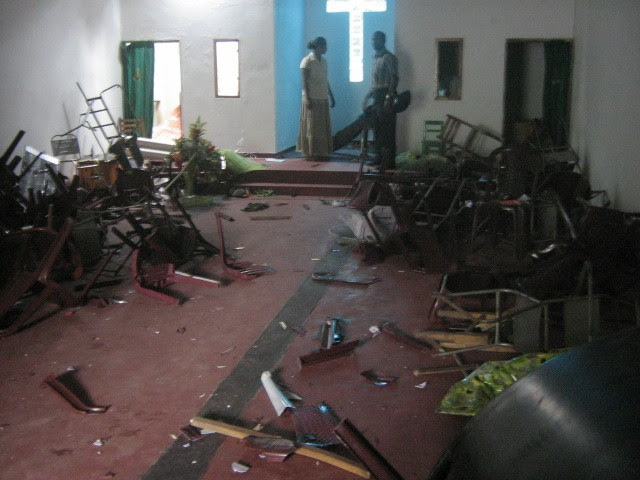 Supreme Court. The Supreme Court ruled that the bill was valid except for two clauses, and since then the bill had remained in committee after being revised in accord with the Court's ruling.
Reports indicate that the bill will be debated in parliament in February and is likely to pass. Though proponents claim that the bill would only restrict "fundamentalist" groups from using monetary rewards or coercive methods to convert people, the language is so broad that it would criminalize any form of humanitarian assistance from religious groups.
The bill is especially concerning because it is the culmination of a widespread pattern of violent attacks on Christians in Sri Lanka (see photo of a church in Sri Lanka's capital Colombo attacked in July 2008). Similar measures enacted in several Indian states such as Orissa have led to an increase in attacks on Christians. If this bill is passed, it would likely serve to legitimize anti-Christian persecution.
Here's How You Can Help
#1 Pray: The first thing you can do to help is stop right now and ask the Lord to intervene.
#2 Next, review our petition. Sri Lankan officials are concerned about their relationship with the United States and other Western countries, so when the people shout, they will listen. We have also found that evil prefers to stay hidden and when we shine the light on it, it flees.
#3 Electronically sign the petition by clicking here.
#4 Print out the petition and take it to your church and have everyone you know sign it. Send it back to us so we can present it to the Sri Lankan Ambassador. Feel free to print out extra signature pages for large numbers of sign ups. When you have collected all your signatures, please mail the signature pages to :
ICC
PO Box 10277
Silver Spring, MD 20914-0277
or fax them to us (301-989-1709).
Please get them back to us by March 12.
#5 Forward this email to all your email contacts and ask them to do the same.
Sincerely in Christ,
Jeff King
President, ICC
International Christian Concern
P.O. Box 10277
Silver Spring, MD 20914-0277
Phone: (800) ICC-5441
Fax: (301) 989-1709
Posted by Douglas Groothuis, Ph.D. at 4:07 PM

thanks brother for this info. I did not see it elsewhere. We have a "sister" church in Colombo, Sri Lanka. db