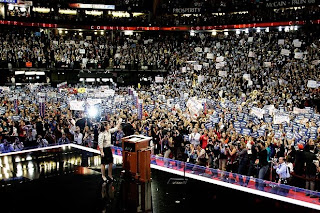 Before you are infected with mainstream media deconstructions of Sarah Palin's speech before the Republican Convention tonight (I refuse to consult them for a time, having just watched the speech), please consider the rumination of The Constructive Curmudgeon.
1. Governor Palin needed to impress the country with ideas, dynamism, and courage. She did so splendidly. She was composed, passionate, articulate, funny, and presentable--all after six days in the heat of the shameless national spotlight.
2. She emphasized the benefits of her unconventional background, thus resonating with many Americans wary of Washington insiders and elites. She has executive experience and has been an agent of real and significant change for the better in Alaska. She has a common touch without being overly folksy.
3. She was not afraid to unmask Barack Obama for what he is: a hyperreality. A hyperreality is an image that has no referent, like a cartoon or video game character. Yet, that hyperreality is taken to be the essence of reality, since people stoped caring about truth and are content with impressions. No, she did not use that term from media criticism (and often used by Jean Baudrillard); but she told the truth about the man who wasn't there, the man who wrote two memiors, but has authored no significant legislation, the man who looks good, but has accomplished nothing of substance. He is the first hyperreal presidential candidate. Her comments about there being nothing left after you bring back the Styrofoam Greek columns said it all: the Styrofoam candidate.
She told the truth about Obama's inability to face the evils of terrorism, his worship of gigantic government, and his love of hugh tax hikes. (She did not mention his militantly pro-abortion stance, but that is already well known.)
Sarah Palin told the truth about Obama--and she did so with spunk, spirit, humor, and verve. No, you mainstream pundits, it was not shrill (a term I'm sure they will use), it was solid and galvanizing for those willing to pay attention. Consider these zingers:

4. Much has been made of Governor Palin being a woman. All I can say from this speech and what I know about her is that she certainly is a woman, a feminine woman, and a woman who is comfortable in her own skin (like Ronald Reagan). But this woman is not afraid to exercise her powers or to unmask pretenders. Who said leadership is (only) male?

5. Palin gave a ringing endorsement of John McCain, emphasizing his strengths and acheivements. She did not hog the stage, but commended the man who wisely chose her. He served and suffered for his country, he understands the military and terrorism, he does not worship big government as the answer to everything.
Sarah Palin transcended my expectations and my prayers were answered. It's a new race, and I'm committed.
Posted by Douglas Groothuis, Ph.D. at 10:45 PM

I read the criticisms before I heard the whole speech, and they were panicked and negative, calling the speech divisive and mean and not constructively laying out why we should vote FOR them. This, after a week of hearing the left tear down Bush and McCain with nary a criticism of their negativism. Then I watched the speech and wondered if they had watched the same speech. She accomplished exactly what she was supposed to: she introduced herself, explained why she was ready for the job, contrasted the choices this election, and why people should vote McCain/Palin. The speech was brilliant, and I think the left and media are realizing they have a real problem on their hands (as opposed to just some podunk woman from the sticks).
And yes, the term "shrill" was used by the pundits, and rightly noted that the term is never used of a man!

Maybe it depends on your political perspective, but I can't understand how criticizing your opponent equates with being mean-spirited.

As if any judgment about one's qualifications is necessarily a judgment of one's character or integrity.

Am I missing something here?

I thought her speech was very good; she clearly did just what the campaign hoped she'd do--i.e., she fired up the base.

I didn't think any of her rhetoric was overly harsh or mean spirited. Rudy Giuliani's speech crossed that line, but I thought Palin's barbs were fair enough.

One thing I did think odd: the constant repetition of the idea that because she's been the mayor of a small town and a governor for 18 months, she has more "executive experience" than Obama and Biden combined. Obviously, if only executive experience counts, then McCain doesn't have experience either.

But perhaps the quantity of McCain's senatorial experience would trump the quality of Palin's experience.

Of course, Biden also has substantial experience as a senator, so maybe this experience trumps both the quality of Palin's executive experience and the quantity of McCain's senatorial experience. But then again, he's only running for VP.

So which kind of experience is most relevant for being qualified for office, and how do the VP's qualifications contribute to the overall judgment?

Does it really matter that Palin, as the VP candidate, has executive experience and others do not? And does it matter that McCain has more experience than Obama when they both, perhaps, have the wrong kind of experience?

This is an unusual presidential election, since we have two senators running for office. When was the last time that happened? So this business of determining who has the most (and right kind of) experience strikes me as mostly a waste of time.

The candidates should instead be focusing on the issues, don't you think?

Yes, but McCain has been in the Senate forever and was a miltary commander. That counts.

Right, I think McCain has great experience (I don't understand why people seem to think that being a long-time senator doesn't count for much since the experience is not 'executive.') My suggestion was that the chief talking point of last night (i.e., that all that matters is executive experience) cuts not only against Obama and Biden but also against McCain himself.

I do think experience is very important. And that's why I supported Biden early in the Demo primaries and could never get too enthused about Obama. He's running eight years too early.

Most importantly, she looks really good in a bikini!

All kidding aside (maybe), I support her because she is prolife. Any other view is irrelevant and highly irreverant to our Lord and Saviour.

Stick to the main issues and stop talking about worldly aspects Palin's life.

And a candidate with little experience who surrounds himself with quality people, and who is adequately informed about the issues, will find a way to be successful in politics.

The reason I'm not voting for Obama has nothing to do with his lack of experience in national politics. Rather, the ultimate deal breaker is his economic, social, and foreign policy. He will guide this nation in a direction that will be harmful to its health.