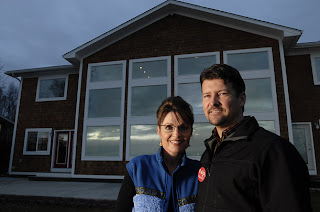 Sarah Palin is shaking up the political and religious scene in several fascinating ways. With no attempt to be systematic or thorough, here are several observations on the passing scene.

1. Gov. Palin has attained the feminist dream, "having it all." She is a wife, mother, and successful politician and poised for greater influence than ever. However, she is not a liberal feminist, since she is Christian, pro-life, and politically conservative. This rankles liberal feminists to no end. What the heck happened?

2. Yes, you conservatives who hate "feminism" in all its forms, she has achieved something impossible without feminism: political success and a functioning, traditional family. Rush Limbaugh today said that "all feminism is BS." Well, without it, Rush, we'd have no Sarah Palin, your "babe." It's time that conservatives realize that feminism was never all bad. Its central premise (supported by the Bible itself) is that men and women are equal in their nature and potential for service and leadership. Gender differences do not make an essential difference in intelligence, savy, or leadership. Feminism went wrong when it became secular and liberal--something it was not originally in the latter 19th Century in America. Read Rebecca Merrill Groothuis's treatment of this in Women Caught in the Conflict. It is a good antidote to historical amnesia, a pandemic today.

3. Some conservatives, such as Richard Land, are swooning over Palin, and hope she will be elected; but they are quick to assert that, of course, she could never lead a church or do anything but unilaterally submit to her husband. This makes no sense at all. She can be a heartbeat from the presidency of the most influential nation on earth, but she cannot correct her husband if he is wrong. She can address the nation and political leaders from around the world, but she cannot be a pastor and give a sermon to fifty people on Sunday morning.

Of course, Land and others think the Bible forbids women from being pastors or equal partners in the home. As one with a high view of the Bible, I disagree with this exegesis, which is wooden and ignores larger redemptive themes in Scripture as well as the clear examples of women leaders, the foremost of whom is Deborah, a woman who held the supreme secular and religious authority over Israel and who is only praised in Scripture (Judges 4-5). And, no, God did not select her because no men were available. That must be read into the text (eisegesis); it cannot be extracted from the text (exegesis). Perhaps Sarah Palin is another Deborah--or, at least a Deborah in training.

4. The liberal media gives the religion of Obama a pass and does not hold against him the racist rantings of his twenty-year pastor, Jeremiah Wright (although Obama realized he had to distance himself from Wright after the Internet exploded with Wright's extremist pronouncements). But the liberal media will descend on Palin's religion and deem her a "holy roller," since she has a background in the Pentecostal Assemblies of God. This is how it works: religion held by a leftist is sacrosanct since it inspires him (Obama) to justice and goodness; religion held by a conservative is dangerous and fanatical, since you never know what a God-obsessed person (Palin) might do.
Posted by Douglas Groothuis, Ph.D. at 6:42 PM

It is good to see you make the point against Christian "complimentarians" who are so pro-Palin and think she could be President, yet still hold that women cannot lead in the church and must submit to their husbands in the family. What a ridiculous contradiction. I had the exact same thought this week. Thank you for saying it clearly.

Add it to the pile of solid evidence that argues that biblical egalitarianism is the true and correct position on gender equality.

I'm not quite sure how I stumbled upon your blog, but I just wanted to say that I've been reading for a few months now and it has quickly become one of my favorites. :)

i'd have to disagree regarding women's roles in the home versus women's role in the secular realm. the Bible speaks clearly about differing spheres of life (ie, the home, the church, the workplace). it is clear on gender role distinctions in the home and church, but silent on gender role distinctions in the workplace. The great failing of feminism's understanding of gender roles in the church is that is presupposes a restriction upon ANY leadership held by women. The great failing of feminism's understanding of submission is that it pictures a wife who has no voice, no strength, and must simply lay down and take a beating if that is what the husband desires. (from your post: "she cannot correct her husband if he is wrong") That is a sad and narrow misrepresentation of the Biblical (and beautiful) teaching on submission.

There are clear differences in Scripture between the church, the home, and the world. Therefore, it is perfectly logical to conclude that Scripture would outline different teaching regarding women's roles within these realms.

"Clear teaching" has become a mantra for traditionalists. It is not clear. If God ordained men to be over women, explain Deborah. Explain female prophets (who have the authority of "Thus says the Lord), and so on. Try reading some other arguments by people who endorse biblical authority but who interpret differently than you do.

It is also "clear" that women must wear head coverings in church. Does your church do that? And it is "clear" that slaves must submit to masters. Do you endorse slavery?

You see, things are not as cut and dried as that. But that in no way undermines the truth or authority of the Bible. You just cannot use it for ideological purposes, but rather look at the whole, the surrounding culture, and find the enduring principles.

bjh did not say that "God ordained men to be over women." He spoke of role distinctions in marriage that would not necessarily apply to political positions. I haven't heard Richard Land claim that "the Bible forbids women from being...equal partners in the home." Perhaps he does. Role distinctions do not assume inequality. I would cite the Trinity as evidence. "Partnership" seems a weak word for describing a relationship that is meant to picture Christ and His Church.

Clearly there is disagreement among people (who have "a high view of the Bible") on this topic, but we should always do our best to represent the opposing view properly.

I did not misrepresent the views. Their basis is the "leadership" of men over women as a universal principle. But this logically entails male superiority, which they deny. There is the contradiction. See RM Groothuis's chapter in Discovering Biblical Equality.

I'm not sure what I believe about gender roles within the church, but I don't think your argument that universal male leadership entails male superiority.

For instance, isn't God the Father in a leadership role that Christ and the Holy Spirit don't hold? (I may be wrong here -- I ask the question genuinely.) But that would no way show that God the Father is superior to the other two members of the Trinity.

No, that is the heresy of subordinationism. See RM Groothuis's comments on the Trinity in Good News for Women.

I think probably the right wing just cares more about religion than the left, and that's why there's more uproar about Palin than Obama.