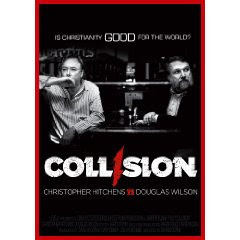 This production suffers from all the worst of the postmodern sensibility and aesthetic. While billed as a "debate," there is no linear presentation of ideas in a classic debate forum. Rather, the video jumps from one setting to another. Now it's a TV exchange; then it's a debate at a seminary; next they are in a bar. I lost track of how many settings there were. It is maddening to anyone trained in linear logical thinking and analysis. All the actual arguments between the two men are clipped and lack sufficient context. Moreover, the camera angles, set conditions, and lighting are deeply annoying. There are strange high-glare closeups, jiggling cameras, as well noisy backgrounds. It is unnerving. Call it videographic ADHD.

Despite all this unnecessary clutter and chaos, a few arguments stand out. For example, Wilson claims that Hitchens has no philosophical grounding for his moral pronouncements, and Hitchens admits as much while denying God as a foundation for morality. Those trained in apologetics, will note that Wilson uses the Van Tillian presuppositional method (with some help from C.S. Lewis on objective moral law). This approach, while helpful for critiquing non-Christian worldviews, has deep limitations in apologetics, since it can marshal no genuine constructive arguments based on natural theology, science, and history. At several points, Wilson seems to concede that he and Hitchens inhabit different thought worlds entirely. If so, how can you build a logical or evidential bridge with the unbeliever? The cumulative case approach--used by William Craig, J.P. Moreland, Douglas Geivett, (if I may) myself, and many others--is the far better method. See Craig's debate with Walter Sinnott-Armstrong, God: A Debate Between a Christian and an Atheist (Oxford, 2003).

Unlike Hitchens, Wilson is not that articulate. However, he is knowledgeable, civil, courageous, and funny at times. He reduces Hitchens worldview to this at the end: "There is no God: s--t happens." We need more Christians, who, like Wilson, are willing to engage in meaningful debates with unbelievers. However, we need less DVDS in which the original debate form is debauched through the insane postmodern insistence on fragmentation and incoherence.
Posted by Douglas Groothuis, Ph.D. at 6:06 PM

Great comments. I read their printed debate in CT and thought Wilson did a great job so I bought the book when it came out.
I ordered several copies of this "debate" expecting more of the same but must join in your critique.
Even if the movie wanted to break from the presentation of a debate and lead the viewer along in a building story it (sadly) failed. After awhile I figured what was happening was Hitchens was allowed his usual verbosity as he has filibustered through other debates and that Wilson's answers were building in gravity toward a climax where he presented his case. But I felt that the arguments, like the movie, never got anywhere. The answers were never really presented or explained and the movie never really had a climax.

I'm watching it again tonight to see if I missed anything, but I was very disappointed. Especially because I like Wilson a great deal and enjoy Hitchens' comeuppances (see his attempts with William Craig or Dinesh D'Souza).

BTW,
In an interview the filmmaker mentioned many times that he is a huge fan of the Bahnsen/Stein debate. I loved it as well (but am not the expert he is). Here it is, and, sadly for Wilson, it is much better than this movie.
http://www.youtube.com/view_play_list?p=75F2FF36C0ECC4A2

I suspect that I will share your opinion of the movie, if in slightly different terms, should I happen to see it.

I disagree with the pragmatism of your preference in apologetic methods. The truth is that we *do* inhabit different thought-worlds from unbelievers: however much common and prevenient grace may cause overlap between the unbeliever and the new creature the believer has begun to be, the epistemological consequences of aversion to God are insurmountable. The skeptic will always succeed in being a skeptic, as long as he chooses to do so.

But it is sheer delusion to believe there is a possibility of "constructive arguments based on natural theology, science, and history" which reach from a heart of unbelief to the knowledge of God. If that were possible, then it would have already occurred in every case, as Romans 1 plus 2 Peter 3:9 would logically indicate.

What unbelievers need is consistent modelling of truth that refuses to accept excuses, not concessions to their epistemic prejudices which cannot achieve their tactical ends.

"Sheer delusion"?! The entire history of constructive apologetics is a delusion? Well, so much for my 900 page, 28 chapter apologetics text. Perhaps others will appreciate it.

These presuppositionalists certainly can be arrogant.

...apologies for the high-flown rhetoric, but I think your publication record will survive my criticism. You have my respect, or I wouldn't be here.

I stand by my criticism of your using the possiblity of "constructive argument" as a criterion for choosing between apologetic approaches. At the same time, I think pretty much all the benefit I've gained from work like yours and Craig's could be recaptured in the "without excuses" phase of the approach I laid out.

I'm not, strictly, a "presuppositionalist." In fact, last time I actually gave the presuppositional/evidential divide any thought, I'd have come down on your side (despite the fact that, in my own case, my faith only began to recover strength and clarity after I surrendered my attempts to have it on my own terms).

I do believe God makes it possible for us to engage in reasonable, responsible discourse across these boundaries. But I deny the possibility of bridging the gap to God with such discourse, or of making such discourse non-porous. (Again, I deny that in the teeth of my own work as a teacher of language and literature, work which demands that I do as much to slow the decay of meaning as I may.)

Some forms of argument remove some excuses for some people, some of the time. But the skeptic will always succeed in being a skeptic, and we do better to proceed from that standpoint.

I know Professor Groothuis is a Schaeffer fan, and probably knows this quote by heart:

"The purpose of apologetics is not just to win an argument or a discussion, but that the people with whom we are in contact may become Christians and then live under the Lordship of Christ in the whole spectrum of life." -- Francis Schaeffer, The God Who Is There

What a powerful statement, by such a great man! In the context of this statement, the best apologetic would seem to be the one which helps the person we are ministering to at the moment. As I recall, God initially called me to Himself through the preaching of simple people, using unsophisticated arguments, and then sustained me through their love and prayers. It was many years before I would come to intellectual fulfillment in my faith.

Regarding that, I would like to thank "pgepps" for this testimony:

"my faith only began to recover strength and clarity after I surrendered my attempts to have it on my own terms."

That resonates deeply with me, although I am sure our experiences were not identical. In misery, I attempted to "sacrifice" my intellect to the Lord one day, but He stayed my hand! :-D

Although the Christian faith is eminently reasonable, it has been my experience that God challenges our reason at times, providing us with opportunities to trust Him beyond our present levels of understanding. I believe this is so that we may worship Him through our trust, as opposed to merely assenting to Him intellectually. When God is proven faithful, it becomes more reasonable to trust Him in the future. Therefore, our faith in Him grows -- not blindly -- but based on an increasing understanding of his goodness.

Upon second viewing, fast forwarding through some of Hitchens' more endless diatribes, and listening more to Wilson's arguments it's not quite as bad as I thought on first viewing.